“‘Something emotive abides in the land, and…it can be recognised and evoked even if it cannot be thoroughly plumbed’. This ‘something’ is inaccessible to the analytic researcher, and invisible to the ironist”. (‘Landmarks’, Robert Macfarlane, commenting on the work of Barry Lopez)

Art and Science in the Landscape

This series of site specific work was made on 02/03/15 at The Willows and Wetland Centre in Stoke St Gregory on The Somerset Levels and is a direct response to learning more about how this particular area was affected by recent flooding. Part of our research involved speaking with staff at the Centre and understanding how the floods were perceived by residents and how that informed local discussion surrounding potential land management, including the possible benefits of more willow beds and vegetation. Informed by James Webber’s initial ideas, the group collected materials from the ground, along with withy sticks and water from the River Tone, and constructed three dimensional environments on paper to represent various flooding scenarios. We added writing ink to the collected waters, and this was rained or tidally flooded into the various topographies and allowed to wander at will…to ‘write’ the story of how water reacts in different situations.

The making of the work led to some interesting observations and discussion between the group. Dave Glover said that seeing the works form helped to reinforce his understanding that “…you can’t apply the same solution to the same problem in every area. You need careful land management in the Somerset Levels.” Olivia Cooke felt that the project made clear to her that “Having previously carried out research on communication of hazards and risk, this project highlighted a different method of communicating scientific information through art. It is just as important to be good at communicating science as it is to be a good scientist..”.

Later, reflecting on our day of making flood art in the landscape, Dave wrote:”It was great to get out from behind the computer screen and to actively model some ‘flood scenarios’. Some were interesting to compare; the chromatography showed where the water ‘pooled’. If you have ever watched how water runs down a window; you will have seen how droplets will merge or follow similar paths.

This was something that was visible today in the artwork which you would not necessarily see that detail in a computer model. One important aspect to note is the speed at which these observations take place; in a river channel erosion may take place over days or even months. 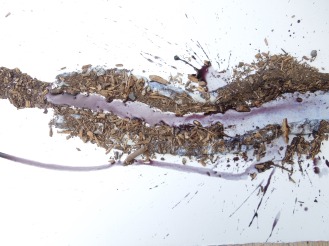